Manufacturers' Representatives - Serving the RF and Microwave Industry Since 1957

"We Represent the Best"

If we don't call on you please contact us ! We welcome the opportunity to discuss requirements and provide assistance.

Gary Tahlmore has a BA degree in Business and Economics from Arkansas. Upon graduation in 1971 he joined Litton Industries. The prime focus while at Litton was the marketing of new crystal technology materials coming out of the labs for use in Gas and Solid State Laser technology, and Bubble  Domain Memory . These materials comprised of “grown” single crystal structures of Ruby, YAG, GGG, LiNbO3 and related materials. While at Litton he also marketed laser optics and coatings, Q switches and Laser Rod fabrication to the same industries.

His next venture included Motorola Communication and Electronics selling Base Station, Trunking , SMR, and Mobile Radio equipment to Commercial and industrial accounts in Northern new Jersey.

From Motorola,  Gary joined Merrimac Industries where his responsibilities covered the marketing and sales of RF and Base Band signal processing components and assemblies for the Western region of the US where he managed 5 sales rep organizations. Gary was directly instrumental in growing an infant Space Hi Rel business representing < 5% of gross sales into a targeted business base which evolved into > than 50% of company revenue over his 6 years of concentration into the Missiles and Space markets.

In 1985 Gary then joined CDB Enterprises, a rep firm specializing in the sales of RF and Microwave technology in the western metro NY  area  and has remained ever since, most recently acquiring, with his partner Paul Hilton, the assets of CDB which now operates as CDB Evolution Inc.

Gary’s 4 kids are grown and enjoying independent successful lives which allowed the door to open for acquiring the business and enjoying his hobbies in ATV riding, Antique Restoration projects and regaining his status as a Gym Rat.

Paul Hilton has a BSEE from City College of New York and began his career at Northrop Grumman in NY.  During his tenure at Northrop Grumman, Paul worked initially in TPS Engineering and GUI development,  then migrated to ATE System Engineering, Architecture and Marketing. He represented the company in the  Critical Interfaces Working Group, a DoD ATE interoperability standards initiative.

After 14 years at Northrop Grumman, Paul started with CDB in 1998 as an Account Representative calling on  commercial,  military , and wireless accounts within the territory.   For several years Paul specialized in selling base station performance enhancements and E911 interface hardware to  service providers in the territory as well as calling on the major providers at the national headquarters level.

In 2009 he and Partner Gary Tahlmore began the  acquisition of CDB Enterprises from founder Christian D. Berger. This culminated   in the incorporation of CDB Evolution in March 2010, and a return to serving only  local accounts as well as co-managing the company.  Paul now covers lower NY, Long Island, and Lower Connecticut. His broad Engineering and Sales background make him an effective resource for both the Customer and Principle alike.

Paul enjoys time with his family in the outdoors  boating, fishing,   biking, and skiing and is an active member in the IEEE. 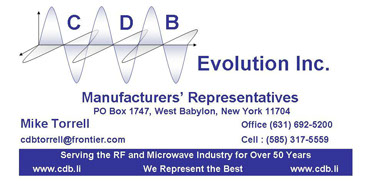 Mike Torrell has over 5 years of experience working with CDB covering the upstate NY region. Michael has over 23 years of sales rep experience in the RF and Microwave field and has been a great addition in our continuing efforts to provide our principles the utmost in quality representation throughout the territory.

Prior to that he has held positions at various electronics companies since his graduation  from SUNY in 1987 with a BSEE degree. Michaels home base is Webster NY and he covers the I-90 corridor, Buffalo, Rochester, Syracuse, Rome, Albany  and south for Binghamton, Endicott and Owego.

Mike has represented our Principles and CDB well, and we look for continued success and growth in upstate New York.